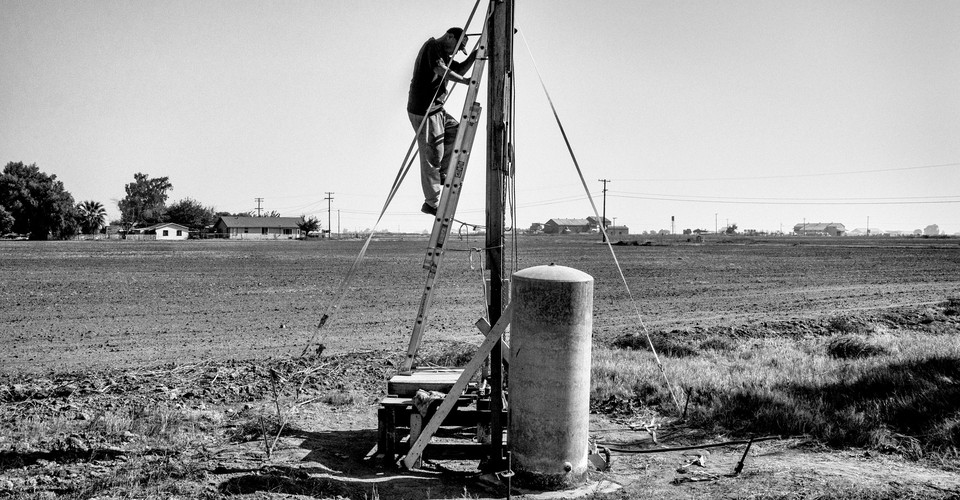 GARDEN CITY, Kan. â€” A century after the Dust Bowl, another environmental disaster strikes the high plains of western Kansas. The signs are subtle but unequivocal: dry riverbeds, fields of sand, the sound of irrigation motors straining to pump declining aquifers.

“We are faced with a fundamental choice,” Connie Owen, director of the Kansas Water Office, told a group of lawmakers, lobbyists, groundwater managers and experts who gathered here last summer to debate. the future of groundwater in the region, now in sharp decline due to overexploitation by industrial agriculture. “What is at stake is even more than the loss of livelihoods, communities or the economy of an entire region – it is the character of who we want to be as a people.”

Similar conversations are underway across the American West as an unprecedented water crisis emerges. It’s no secret that one of the worst droughts in 1,000 years is intensifying heat waves and mega-fires; whereas historic declines in surface water levels coincide with historic peaks in demand as the region becomes hotter, drier and more populated; or that conflicts escalate over who uses the amount of what’s left. The acute scarcity leads to the search for underground water. But the main western aquifers are also in difficulty.

Aquifers are essential resources for human survival. Groundwater is the only source of drinking water for a third of the world’s population and supports nearly half of irrigated agriculture on the planet. Yet far more groundwater is pumped than can be replenished naturally. Most of the dryland aquifers are disappearing. These include the two major groundwater systems of the western United States: the Central Valley Aquifer of California and the Ogallala Aquifer, which underlies the heart of North America. South Dakota Texas. If we lose these aquifers, we will lose nearly 20 percent of the world’s grain harvest, over 40 percent of our country’s beef production, and about 40 percent of the vegetables, nuts, and fruits consumed in the United States.

Aquifers are not underground lakes or oceans, but complex mosaics of sediment, fluids and movement. Each behaves as if they have a unique personality. Shallow aquifers tend to be volatile, reacting quickly to surface activities such as construction, agriculture, and pollution. Deep aquifers are generally older and self-contained; they charge slowly or not at all. Aquifers do not die suddenly. Unequal even when full, they also wear out piecemeal.

Some consequences of the loss of aquifers are already visible in western Kansas, where I grew up and where my family has farmed for generations. Eight decades of intensive pumping have brought down the water table. Almost all the springs and streams have dried up. Most of the wells have shrunk and many have been completely emptied. Today, the same place that nurtured generations of my family has one of the highest rates of aquifer decline in the world.

Today, the same deep-well irrigation that gave farmers like my great-grandfather a second chance after the Dust Bowl in the 1930s is depleting the part of the aquifer that remains. This poses a threat to the existence of many Plains communities, which have already been hit hard by corporate takeovers of farmland, declining populations, increasing suicide and drug addiction deaths, and inequality. racial and economic. The benefits of industrial agriculture flow from groundwater; The same is true of the tax bases, property values â€‹â€‹and budgets of hospitals, schools and social services in our communities.

Many people in the Plains would like to save the aquifers and share some of this groundwater with future generations. But stopping burnout isn’t as easy as it sounds. The underlying reasons for the loss of aquifers are difficult to pin down, often escaping the explanation of the myths and slogans of today’s partisan divisions. That is, exhaustion condenses many of America’s problems into one drama.

One myth about the decline of aquifers is that conservative rural farmers are the only ones to blame for this self-defeating loss. This is not true. Instead, farmers’ choices to continue pumping groundwater reflect a larger system of financing, profiting and consuming resources.

Many independent Plains farmers get by, break even, or lose money growing irrigated crops. Depending on annual market fluctuations, revenues from corn, alfalfa and wheat may not cover production costs. These losses are offset by federal farm subsidies, crop insurance programs and bank loans, assistance that forces farmers to double their wasteful practices. To compensate for the losses, some farmers are cultivating more acres. It doesn’t always improve their income, but it traps farmers in an irrational cycle of debt and waste, clogs commodity markets, and drains aquifers.

One of the main drivers of burnout is corporate profits. Large industries, their shell companies, and distant investors have moved many family farms here over the past three decades. Absent owners control about 60 percent of the land around my family’s farm. Some of the country’s largest meat-packing plants, mega-dairies and ethanol plants have moved in. They pay nothing for the groundwater they use, other than the cost of pumping it. Their profits are exported to distant shareholders and managers. When one area dries up, these businesses simply move to another, while local residents face growing bills.

The governance of groundwater can also be tainted by corporate influence and exclusionary rules. The state of Kansas has established “groundwater management districts” to allow communities in areas with high water consumption to decide their own futures. In principle, it was a good idea. In practice, this has produced the opposite result. Today, only those who own at least 40 acres of land or have substantial water rights can vote on aquifer policy, meaning those with authority to decide the fate of the Ogallala Aquifer understand the same growers and companies that reap the most short-term benefits from emptying it. Yet the majority of rural Kansans are excluded from the processes that will determine the long-term future of their families and communities. The burden is heaviest on those who are already struggling to make ends meet.

Together, these dynamics form one of the great groundwater scams of our time. Rural people and land are exploited and then blamed for the conditions of their own marginality. Businesses are reaping the rewards and spreading distrust and division to do so. Failures of politics, democracy and perception turn into an environmental calamity. Similar dramas of groundwater loss are spreading around the world. Most of the aquifers in the arid regions of the world are in decline. As the Earth warms and droughts intensify, these pressures will only increase.

When groundwater runs out, the myths of growth and profit crumble to dust. The drying up of aquifers can lead to famine, migration and violence. Or they can inspire us to rethink our relationship to each other and to the irreplaceable natural resources we share. Aquifers belong to everyone, and especially to future generations.

Soon the Kansas House Water Committee is expected to release its proposed groundwater policy review. It is a unique opportunity to find a better way forward. If the measure fails, pressure will increase on state authorities to impose restrictions. But challenges remain, including the preference of powerful agro-industrial interests to continue pumping what is left of water.

Reasons for hope could also be found in Kansas. Citizens are mobilizing for inclusion in conservation districts. Environmental groups are suing to protect the wetlands drained by irrigation. In 2016, Northwestern Kansas farmers worked with their management district and voluntarily agreed to reduce extraction; a study published the following year showed they could make more money by pumping less water. This news can ease resistance to change. Recognizing the need to slow aquifer loss, more and more farmers are speaking out and calling on state officials to impose transparent and fair limits.

The loss of groundwater is a generational test of our ability to come together around common issues. The solution is obvious: we cannot continue to withdraw more water from aquifers than can be replaced naturally. The use of aquifers must be sustainable.

Achieving this goal will require better policy, public action, personal accountability and political leadership. Authorities should set benchmarks for reductions in groundwater use and be prepared to impose mandatory restrictions if these are not met. Benchmarks should be adapted to local conditions and coordinated between regions. At the same time, the long-term economic and social value of groundwater must be correctly calculated. Everyone, including small farmers, growing cities, and giant agribusinesses, should be held to the same sustainability standards and pay for what they use. Profit alone cannot justify eradication. We need guidelines to ensure that sustainably managed groundwater is distributed in a transparent, efficient and equitable manner. Federal farm subsidies, crop insurance, and conservation programs should be rebuilt with sustainable agriculture as a goal. Such programs should allow farmers to save groundwater while making ends meet. Additional programs should help support rural populations and communities as they transition to a sustainable relationship with their aquifers.

These measures can help prevent an environmental disaster in the American West. And they can help us begin to value aquifers for what they are: precious national treasures that deserve our protection, management and care.