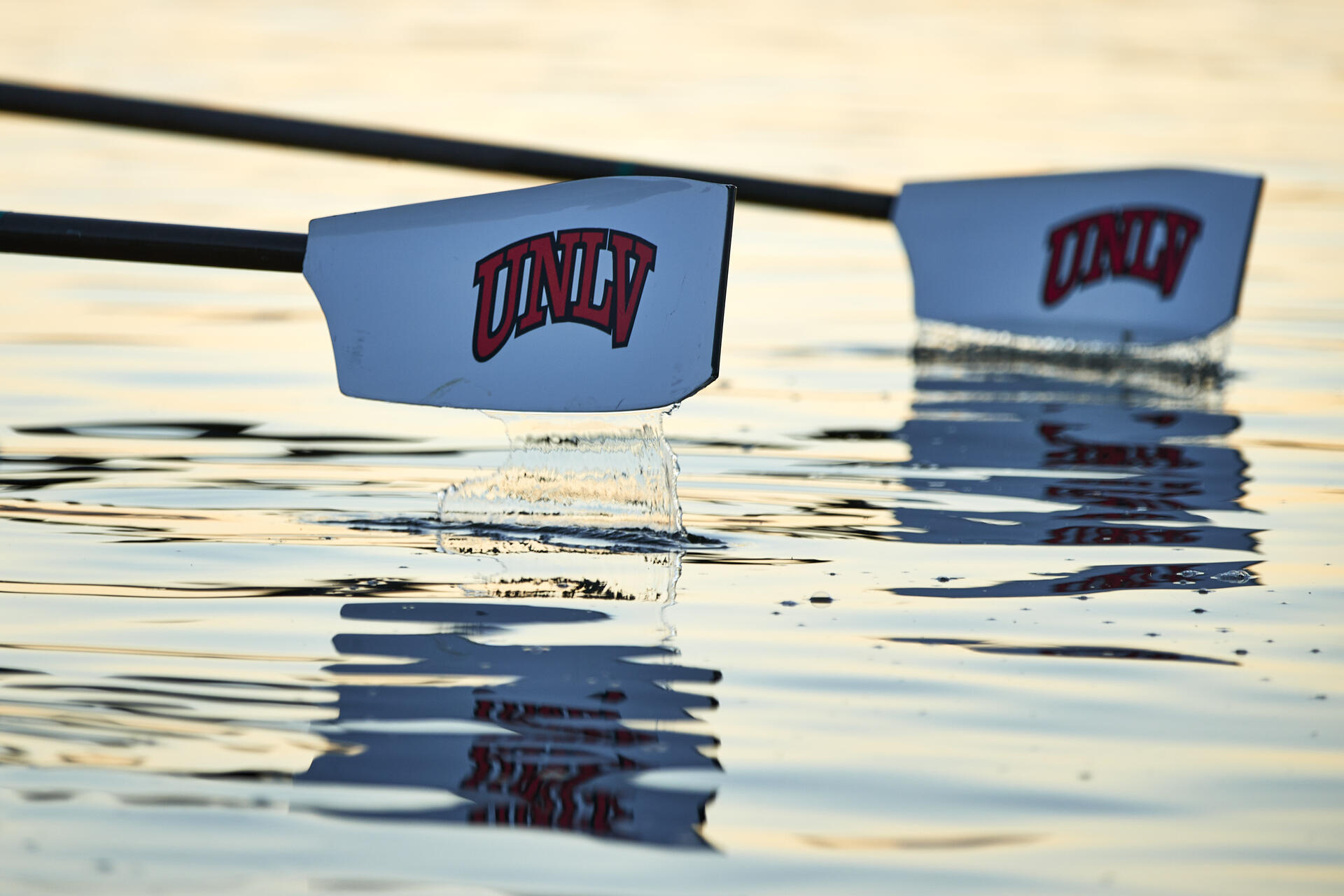 It’s 5:30 a.m. and the hues of orange and yellow skies reflect off Lake Las Vegas, welcoming the silhouettes of the UNLV rowing team to practice. While most students (and faculty) snooze their alarms, the team ventures into the water.

We are at the beginning of March, but winter is still being felt so early in the morning. The boat picks up speed and suddenly the 40 degree temperature and light winds that seemed imperceptible on land become remarkably apparent as your nose and ears start to tingle.

The team appears phaseless as they glide across the body of water. Their oars dance in a pattern of such synchronicity that it makes the hour of intense practice easy.

The team is divided into two groups on the water: an eight-person rowing boat and another four-person boat. At the front of the eight-person hull, Scarlett Baughman faces the team as she guides them across the lake.

The hospitality major started rowing in high school and didn’t want to drop out in college. So she appealed to the registered student organization of UNLV and founded the rowing team. It is now one of 350 student groups at UNLV, and as team captain and club president, she dedicates her time to making the team stronger.

“If there’s low morale or a lack of motivation, I have to watch what I’m doing, pivot, and make sure I keep everyone’s spirits up,” Baughman said. “I see this as my primary responsibility and take it seriously.”

Although Baughman is a seasoned veteran, the team welcomes anyone interested, regardless of experience level. Most of the team members joined this year and are new to the sport.

“My advice to someone who wants to join the team is to do it,” she said. “Rowing can be tough at first, but in the end it’s one of the most rewarding things I’ve done. Being able to join a sport where you feel part of the community is special and the friends you make will have a lasting impact.

Coach Kayla Lankford of the Lake Las Vegas Rowing Club (LLVRC) guides the team. Although she didn’t start in the sport until her senior year of high school, opportunities soon presented themselves when she received a full scholarship to Oklahoma City University, competed in the World Trials U23 and the World University Games in South Korea.

Her love for rowing translated well into a love for coaching, which led her to pursue her career. Today, she dedicates her time to passing on the knowledge and skills she has acquired to an equally enthusiastic community of rowers.

UNLV Rowing traveled to Oregon for the Collegiate Covered Bridge Regatta on April 16, their first team travel event and took third place in two of the day’s events.

Interested in joining the team? Find out how you can get involved.

Verizon outage reported in US