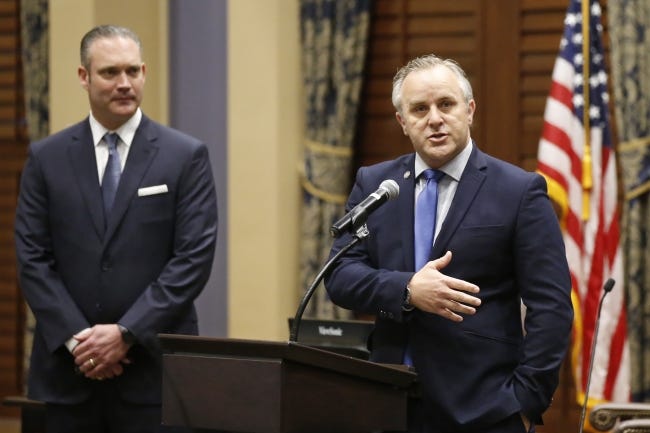 The political stalemate in the state Capitol means Oklahomans won’t see any further tax cuts or inflation cuts in the near term.

Leading Oklahoma House Republicans introduced a package of bills Monday to cut various taxes, offsetting the costs by cutting the budgets of several state agencies — including a 53% reduction in the governor’s office.

“It’s obvious … the relationship between the governor and the House of Representatives is not at its best,” Treat said. “But we’re not going to get involved in political shenanigans.

“We are going to have a serious and mature conversation about tax reform.”

House Speaker Charles McCall, R-Atoka, dismissed the idea that passing legislation could be construed as a political stunt.

Monday kicked off a special legislative session in which Governor Kevin Stitt called lawmakers back to the state Capitol to cut the state’s personal income tax rate by 0.25% and reduce or eliminate 4.5% sales tax on groceries.

Although the House plans to vote on Wednesday on a slate of bills to temporarily reduce or suspend personal income taxes and groceries taxes, the bills are likely dead when they arrive in State Senate.

“We’re ready to get things done,” McCall said. “We are ready for people to get (tax) relief since the governor has vetoed the other measures.” Stitt vetoed one-time $75 direct rebates for all taxpayers and a bill to eliminate the 1.25% tax on all vehicle sales.

Treat noted that the state’s personal and corporate income tax cuts and the reinstatement of the refundable aspect of the working income tax credit came into effect this year. Other tax relief options were rejected by the governor this year, he said.

Since Stitt made his call for a special session, McCall and Treat said they had had no communication with the governor about what tax reforms he would like to see and how to pay for them.

Stitt’s office did not respond to a request for comment on Monday.

Many of the tax reduction proposals introduced in the House resemble bills the House passed earlier this year.

“We want to put all the options on the table, and we want to look at them,” McCall said.

Although House lawmakers introduced other tax-cutting bills, including measures to phase out the state’s 4% corporate tax and suspend the franchise tax, McCall said these bills would not be heard in the special session because they did not respect the governor’s call for the special session.

To offset the tax cuts, top House lawmakers have proposed cutting $1.8 million, or 53 percent, from the governor’s office budget.

Other proposed budget cuts include $193 million, or 22%, from the Oklahoma Health Care Authority and $45 million, or 39%, from the Office of Corporate and Management Services.

House Appropriations Chairman Kevin Wallace, R-Wellston, said the cuts are necessary to balance the state budget if tax cuts are to go ahead.

When asked if the agency’s proposed budget cuts were retaliation, McCall replied that they were not.

McCall pointed to comments from Stitt’s end-of-term press conference in which the governor talked about instituting fixed budgets in state agencies. Stitt did not request a flat budget for his office.

The state budget for the coming fiscal year includes increases for both houses of the Legislative Assembly and the Office of Legislative Services.

There is no timeline for the Senate tax reform task force to make recommendations.

Sen. Julie Daniels, R-Bartlesville, who will lead the task force, expressed reservations about the hasty cuts. She noted that it takes a three-quarters majority in both legislative houses, a threshold almost impossible to achieve in a GOP-led body, to raise taxes.

“Trying to do something after a split-second budget was approved in an election year where the atmosphere is very politically charged, I think, wouldn’t yield very good tax reform that we might regret. “, she said.