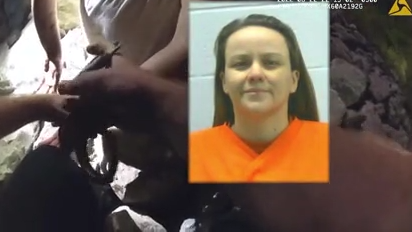 OKLAHOMA CITY (KFOR) – An inmate escaped from a community correctional facility in Oklahoma City and was quickly found hiding in a nearby field.

A woman in prison gear was seen crossing I-44 and North Kelley Avenue last week. Police said it didn’t take them long to catch him using a helicopter and a K9 unit.

Detained Tiffany Arnold was only missing for about 35 to 45 minutes.

“We got a call from a woman who was crossing the freeway there. I-44 and Kelly. When we checked in shortly after getting the call from the woman running, we got a call from the DOC saying they had an inmate who ran away from their facility at that location… We assumed that was probably the escapee,” said Oklahoma City Police Captain Valerie Littlejohn.

Arnold was located south of I-44 and west of the railroad tracks across a shallow creek. Thus, she did not stray far from the community correctional facility on Grand Blvd.

Oklahoma City police said they don’t know how she escaped, but she was taken into custody and returned to the Oklahoma Department of Corrections.

“We used Air 1 and K9 to search the area, eventually located her in the area and were able to take her into custody without incident. She gave up and we took her back to the DOC facility where she was taken back into custody with them,” Littlejohn said.

The Oklahoma Department of Corrections told KFOR that she had never been a threat to the public.

Tiffany Arnold has been charged with more than 15 offences.

Recently, she was charged with crimes like grand larceny and misuse of another’s identity.