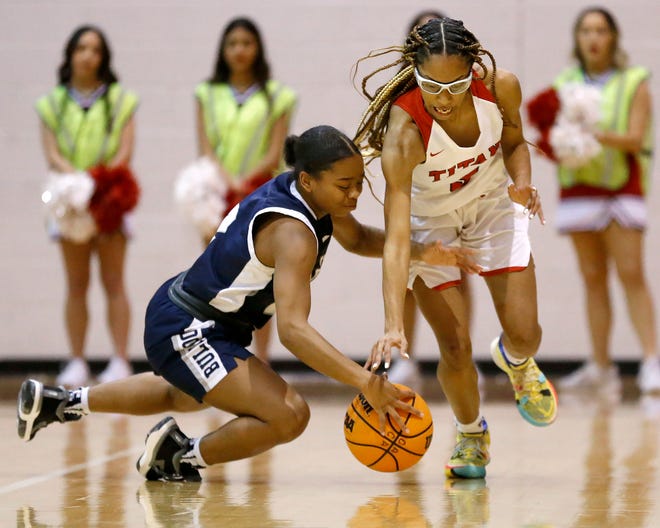 After games were pushed back two days due to weather complications the state faced throughout the week, the Class 6A-5A regional tournament began on Saturday.

Here is a quick overview of some actions:

Anjewl Murillo took the screen off the post and dribbled to the elbow of the free throw line.

Guymon missed the potentially game-winning layup in the dying seconds and Guthrie escaped with a 53-52 win at Carl Albert to advance to the Regional-1 Championship.

“We haven’t made any changes,” Guthrie’s coach Malcolm Roberts said. “It’s a playoff atmosphere and we had a bit of nervousness, but that kind of dissipated, especially around the third and part of the fourth, we were riding really, really well.”

After falling 10 points behind in the first half, the Bluejays activated their press defense and it did wonders for them. Guthrie was regularly battling for steals and Murillo benefited from either scoring or assisting on the majority of the baskets.

Guthrie’s only flaw was his free throw shooting making just three of his last eight attempts.

“Down the stretch, we were just running out of free throws,” Roberts said. “If we make our free throws, we don’t put ourselves in that position. It could have been tragic, luckily the jitters hit them then.

Murillo finished with 18 points while teammates McKenna Gatson had 11 and Mariah Dightman finished with eight points. The championship will take place on Tuesday at 7 p.m.

Continued:How a letter inspired Stillwater’s Kendra Kilpatrick to continue coaching during the battle with cancer

Jasmine Mcloud, Karrigan Powell and Nini Geretta couldn’t be stopped when Putnam North needed them most on Saturday.

After falling behind in the first half, Ponca City came back strong to level the game as Ashlynn Fincher finished with 23 points. But Putnam North didn’t let his hot start blame the Panthers in the end and it was the line that was most responsible.

Putnam North beat Ponca City 53-47 in double overtime at Sand Springs to advance to the Class 6A Regional-4 Finals.

“Some of our older players have really stepped up their leadership,” Putnam North coach Logan Martin said, “just to really pull it off and not lose their cool.”

Senior Mcloud finished with 15 and Powell had 14 while rookie Geretta finished with 13 in the win. Putnam North will face Sand Springs in the regional final on Tuesday at 7 p.m.

The Carl Albert junior scored the first 11 points for the Titans with three 3-pointers in the quarter. She finished with 14 points in the first quarter and 16 in the half she played.

Landon’s hot start led to Carl Albert’s 73-26 road against Altus to advance to the Regional-1 championship game. Class 5A’s top-ranked team had no problems with Altus, who hadn’t won a game all season.

The Titans took a double-digit lead in the first quarter and didn’t look back from there, holding Altus to single digits in all four quarters. Once the majority of the starters were seated, Carl Albert’s Ausha Moore and Evi Mitchell took over. Mitchell scored nine of his 14 points in the final quarter while Moore scored four of his 17 points.

Carl Albert will face Guthrie in the Regional Championship at Carl Albert on Tuesday at 7 p.m.

Nothing got past Moore’s defense on Saturday.

With a lockdown defense in the final two quarters, Moore beat Putnam City 58-30 at Choctaw to advance to the Regional Championship Game-4.

After producing a 24-17 halftime lead, Moore had a big run, scoring 17 points in the third and fourth quarters while holding Putnam City to eight and five, respectively. Moore gave up the most points in the second quarter (12).

The Lions responded with an impressive offensive shot. Albony Bryles led all scorers with 15 points while Kayla Jones (14) and Brooklyn Haywood (13) followed.

Moore will face Choctaw in the regional final on Tuesday at 7 p.m.

Choctaw beat US Grant 76-12 behind Raven Jackson’s 12 points and Southern Nazarene committed Carley Gasaway’s 11 to advance to the Regional-4 Championship.

James D. Jackson covers high school sports in Metro and Oklahoma City State. Do you have a story idea for James? He can be reached at [email protected] or on Twitter at @JamesDJackson15. Support James’ work and that of other Oklahoman journalists by purchasing a digital subscription today at subscribe.oklahoman.com or using the link at the top of this page.

These are the counties in Oklahoma City, OK Metro, where COVID-19 is growing fastest

Tribute to some of Oklahoma’s pioneers