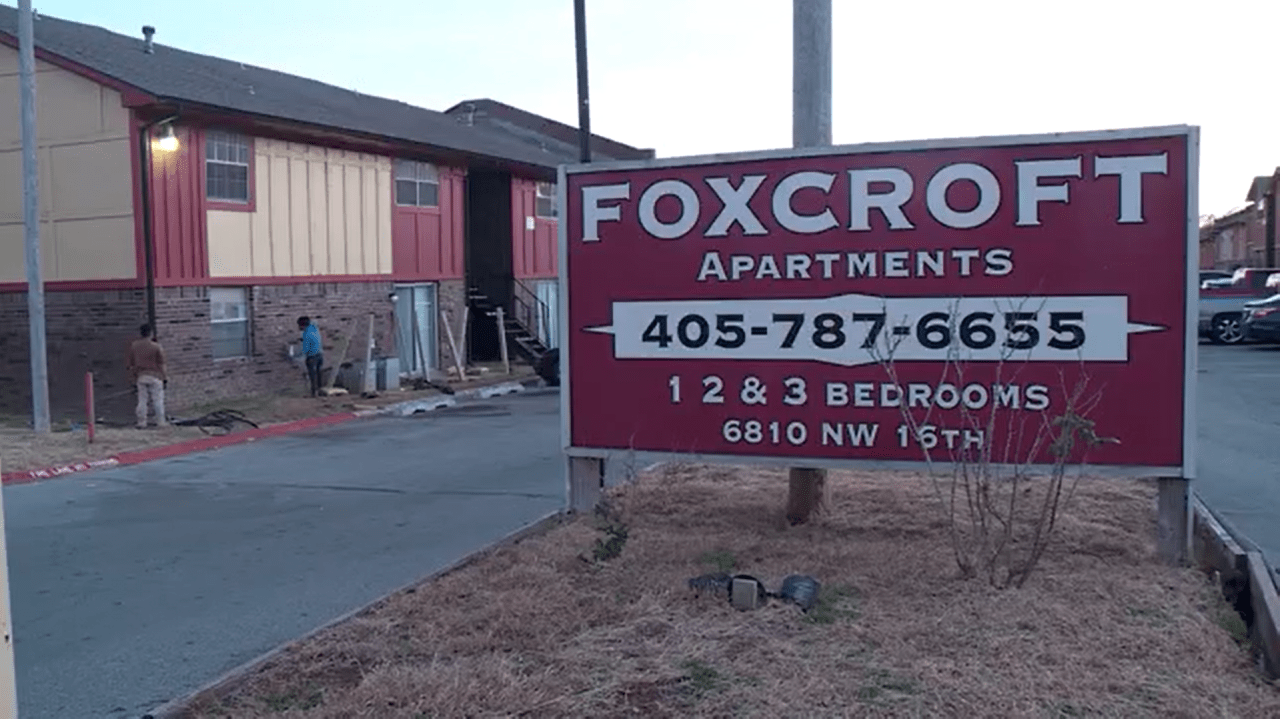 OKLAHOMA CITY (KFOR) — Potential new problem for entities that manage Foxcroft Apartments, the apartment complex in northwest Oklahoma City that has had no heat at all this winter.

A lawsuit has been filed against them accusing them of breaching a court order that says they cannot charge or accept rent from tenants until the heating is back on.

“We ask the court to hold these defendants in contempt of court for continuing to collect rent from Foxcroft tenants in direct violation of a court order prohibiting them from doing so,” said Ryan Owens, an attorney representing some. Foxcroft tenants.

The petition was filed on March 23 in association with a lawsuit they filed in January against Foxcroft owner, Foxcroft Exchange, LLC and Regional Management Co.

Owens said Foxcroft management had not done a good job of getting the message out to tenants and that he had been informed that at least five tenants had paid their rent since the temporary injunction was issued.

“They could have provided notice, a little piece of paper on everyone’s door to provide an update,” he explained. “But probably the most practical way to do it was that when someone came into the office to pay rent, they would be to say, ‘Well, right now we can’t take that rent. “”

KFOR contacted attorney Lisa Molsbee who represents Regional Management Co., one of the defendants in the case. She sent us the following statement:

“Foxcroft Exchange and regional management do not believe they violated the court order. A very small number of tenants, five out of approximately 100, paid their rent either through the online payment system or by placing payments in the rent deposit box, despite court instructions that rent does not need to be paid. The landlord and the management company made no attempt to collect the rent. Any monies that have been inadvertently collected are being or will be returned or refunded to tenants.

Prior to our ownership, the property was in very poor condition. We regret the inaction of the previous owner in creating these living conditions for the residents of Foxcroft. Part of the ongoing property renovations include the restoration of the central heating which requires a complete replacement of the property’s gas line, as well as a complete replacement of the HVAC in almost every unit – a monumental task in any which environment, especially one that suffers from supply chain shortages. As the new owner and manager, we are working diligently to complete the process, and it will be complete soon.

As the new owner and management company of the complex, we are working to make the apartment community a place we can all be proud of. In the meantime, we’re doing everything we can to keep our tenants comfortable, including providing free hotel rooms and transportation, providing hundreds of portable space heaters, and allowing tenants to break their lease without consequence. Despite the current difficulties, we have had new tenants looking to move into the property after seeing the renovations carried out by the new owners/managers as they sought to improve the property, although new applications are not being accepted for the moment.

Meanwhile, Owens discovered another apartment complex that had heating issues this winter, and it’s run by the same management as Foxcroft – Wehner Multifamily, LLC.

‘At Hillcrest Residence Apartments we were contacted by a person who lives there stating that they had not had heating in their building for over a year,’ he said. “So I went out and visited some of the residents. It appears this issue is isolated to a building that has 20-25 units in this building that have been without heat for a year. »

He also shared another detail of his investigation

“I was able to confirm with an agent at the property management company, which is Wehner Multifamily LLC, that the heating in this particular building had been off for a year.”

Wehner Multifamily is not being sued at this time, but Molsbee explained that it is a third-party management company that Regional Management has an agreement with to manage the Foxcroft apartments.

KFOR met Monesha Minter, the tenant of the Hillcrest apartments who contacted Owens. She said having no heat for the past year is particularly unacceptable because of how the winter cold has negatively affected her one-year-old son, who already has a heart condition.

“It was a challenge,” she said. “My son has heart disease and he already has quite a few medical problems. And then that he is constantly cold and his lips tremble and his lips turn blue. We had to buy extra blankets and spend so much time trying to seal the windows and get blackout curtains and things to keep the heat in, put blankets on at night. I mean, we literally woke up at night, just like shivering, so cold.

She said the rental office manager was not helping her.

“Well, the manager says it’s not her problem, it’s the owner’s problem and she’s brought it to the attention of her upper management on several occasions,” Minter explained. “They keep telling him they’re working on it. They’ve been “just working on it” for a year now. So we never got straight answers on when it will be fixed or how it will be fixed or what they can do in the meantime until they can get it fixed.

Minter said she would soon take her son to live with his family or stay at a hotel.

“He’s going to have heart surgery soon, and we can’t bring him back here,” she insisted. “There’s no way.”

Still no heating at Foxcroft Apartments as winter storm hits

KFOR visited the Hillcrest rental office and the current manager said of the heating allegations: ‘I am not in a position to speak to it. Things are taken care of. »

She also confirmed to us that Hillcrest is managed by Wehner Multifamily.

KFOR contacted Wehner Multifamily on Thursday regarding the heating of the two apartment complexes and is awaiting a response.