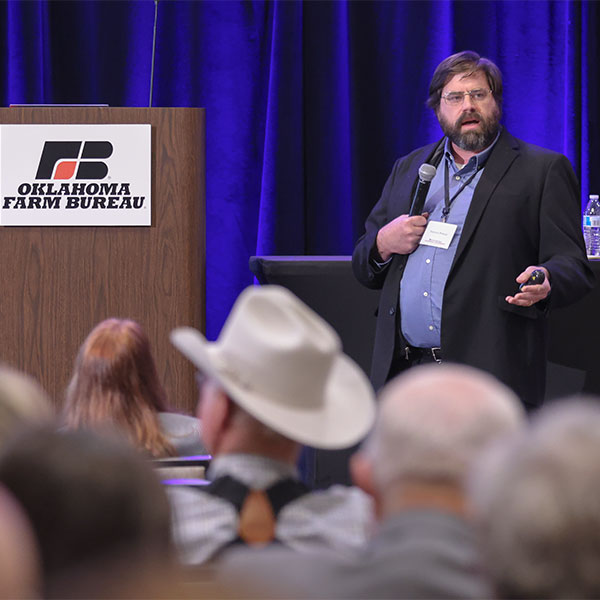 The event started with Donnie Anderson, director of the Oklahoma Bureau of Narcotics, giving an update on medical marijuana in Oklahoma and explaining the challenges posed by the burgeoning industry. Anderson shared with OKFB members the growth the OBN has seen in the industry’s illegal activities.

Oklahoma has seen exponential growth in marijuana operations – both legal and illegal – due to cheaper land prices, inexpensive license fees, and no limits on the number of dispensaries. Oklahoma has 2,300 marijuana dispensaries, while states like Oregon, Colorado, and California have a fraction with 560, 520, and 261, respectively.

He also highlighted the impacts of marijuana operations on the land, the environment, and the surrounding community. The main environmental impacts are mold, waste and improper disposal, electrical hazards, excessive water consumption and strain on the electrical grid. Other impacts include suspect land sales, public safety and law enforcement security.

“It didn’t happen overnight, and it’s not going to change overnight,” Anderson said.

Members of the Farm Bureau also had the chance to hear Adria Berry, executive director of the Oklahoma Medical Marijuana Authority. Six months into his role at OMMA, Berry is optimistic about the direction his organization is headed.

Oklahoma’s medical marijuana industry began with the passage of State Question 788 in June 2018 and now has more than 8,300 growers in the state, Berry said.

Like Anderson, Berry attributed the unprecedented growth to the lack of licensing caps and the lack of qualifying requirements for obtaining a medical marijuana card.

Berry said the process to get a medical marijuana card is as simple as meeting a doctor online and submitting the doctor’s recommendation along with a photo ID. The applicant often receives his card within a week.

She encouraged OKFB members to be part of the solution and to contact her organization if they notice suspicious activity.

During dinner, Senator Roger Thompson and Representative Kevin Wallace visited with participants to give an update on state appropriations and budget.

State Auditor Cindy Byrd kicked off the afternoon speaker list, discussing her role as a state auditor and the many types of audits she performs.

“It’s very important to me as a state auditor to listen to our citizens,” she said.

Byrd explained the role ad valorem taxes play in funding public schools and shared details from the Epic Charter Schools Investigative Audit. She also encouraged OKFB members to get involved in county government and to volunteer to serve on county councils.

“Taxpayer funds must be protected,” she said.

Members of the Farm Bureau also had the opportunity to hear from the Oklahoma delegation congress staff, including staff from the offices of Sen. Jim Inhofe, Sen. James Lankford and Rep. Frank Lucas. They visited OKFB members about the upcoming farm bill, challenges with U.S. waters, and growing tension between Russia and Ukraine.

He also spoke about the future of agricultural law, citing challenges such as increasing foreign ownership of farmland and urban encroachment on rural areas.