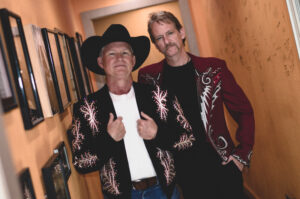 Joel Weaver and Brad Davis, better known as The Heroes band of Commerce, don’t consider themselves rockstars. This despite the fact that Davis has a Grammy, Weaver has worked in television, and between them they have performed with almost every big name in modern country.

Having performed with artists like Reba McIntyre, George Strait, Merle Haggard, Willie Nelson and many more hasn’t given these locals a celebrity ego. In fact, quite the opposite – Weaver and Davis have been more dedicated than ever to uplifting the Northeast Texas community through music.

During the week of January 15, the heroes found themselves hard at work in their Commerce studio for an upcoming concert during the grand reopening of the Main Street Theater in Sulfur Springs. They were preparing their classic setlist: John Denver, The Eagles, Johnny Cash… but adding new material like jazz, bluegrass and sketch comedy.

Although they now play in smaller venues than their days as session musicians in Nashville or headlining Vegas ballrooms, Weaver and Davis embrace the unique opportunity of intimate, beloved spaces like the Main Street Theatre, Foster’s Place in Como, and more.

“The arts are so important,” noted guitarist Joel Weaver. “We are happy to contribute to this charitable cause because without the arts, humans lose their humanity.”

The Northeast Texas crowds also remind the heroes why they got into music in the first place, Weaver said.

“The music was perfect and it’s great to see how much they engage the crowd,” said theater president Lyndie Mansfield. “We would love to see them again – it’s amazing how dedicated they are to supporting the arts in small venues.”

This, in general, was the experience of Weaver and Davis upon their return from the world of international recording art. Fourteen years ago, Davis, a native of northeast Texas, moved his gear to a storefront on Main Street in downtown Commerce.

The friendliness and connection of our rural region is what has inspired the Heroes in their recent philanthropic projects.

“People approach you and talk to you that you wouldn’t otherwise be able to go with,” Weaver said. “They’ll approach you from across the street, or in a restaurant…to me, that’s the coolest thing. It’s just about people. »

Weaver recounted a recent time when they performed John Denver’s “My Sweet Lady” at the Texan Theater in Greenville. An older couple told the duo that they got up from their seats and started dancing in the aisles – later telling the heroes that it was one of the songs playing at their wedding.

Although the pair are still doing projects for major clients in Nashville and Los Angeles, they’re putting the gears in motion to help develop the region’s musical talent.

For example, they transformed the facade of the studio into a music store. A musician in need no longer needs to travel to Dallas for a broken string or a failing amp – the heroes “probably have everything you could possibly need” straight from the trade.

Davis and Weaver encourage people to come — if the studio seems closed, it’s probably because they’re out back working on new material. Just call the number on the door and they’ll let you in, they said.

The heroes have also held jam sessions for local musicians at Commerce Green, and look forward to more once the temperatures warm up. One of the band’s dreams for the future is to bring the sessions to Downtown Square in Sulfur Springs.

Nowadays, Heroes are ready to help a multitude of good causes in our region.

“Even though we’ve never heard of someone before, it’s worth our time and effort to lend a hand,” Weaver said. “We are lucky to have a job that we love. We have a lot of projects going on, we do everything.

Upcoming performances for The Heroes can be found at: https://www.facebook.com/theheroeslive/ Where http://theheroeslive.com/