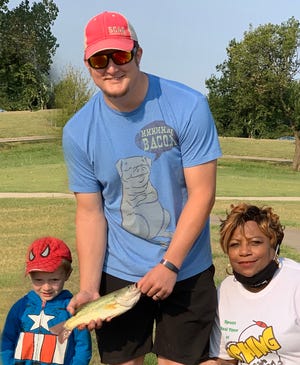 Events in the Oklahoma City Metro Area: News and Events

The fishing event will also include a remote control boat racing competition, food trucks, moon bounce and more. There will be prizes for first fish, most fish and biggest fish. Reels, bait and permits are provided and each child will be given a fishing rod to keep. Dads will be entered to win gifts including a flat-screen TV, grill and more.

Oklahoma City Community College President Mautra Staley Jones will be one of 11 inductees into Oklahoma’s African-American Educators Hall of Fame.

“This honor is especially special because I want to live my life as an example for kids who grew up like me,” Jones said. “It’s important that kids see themselves in successful adults, otherwise they have no idea what’s possible.”

Jones is the first woman and first person of color to serve the OCCC in this capacity. She is also the first African-American female president of an Oklahoma institution of higher education that is not a historically black college or university.

The Central Oklahoma Chapter of the American Historical Society of Germans From Russia (AHSGR) has scheduled a gathering of Russian Germans descended from all over Oklahoma from 9 a.m. to 2:30 p.m. Sept. 17 at Herold Church. Mennonite, 3.5 miles east and 2 miles. south of the town of Bessie.

Christina Siemens will talk about her family’s emigration from Russia to Canada, Mexico and the United States with all the hardships and dangers they faced. There will also be a screening of the film “Waiting for Waldemar”, a German family’s saga of danger, imprisonment, escape from Ukraine, separation and finding another.

The UCO Foundation receives a grant

The University of Central Oklahoma Foundation recently received a $5,000 grant from the Edmond Women’s Club, a voluntary organization that promotes cultural, civic, educational, and community efforts.

The grant will provide five $500 scholarships in the fall and spring semesters to liberal arts students doing internships focused on advancing community initiatives.

The OCCC welcomes an award-winning artist

Feliciano is recognized as the first Latin artist to enter the English music market and has recorded nearly 70 albums, received more than 45 gold and platinum records and won nine Grammy Awards.

Three songs are milestones for Feliciano. “Light My Fire” in 1968, “Che Sarà” in 1971 and “Feliz Navidad” in 1970 which was named one of the 25 Greatest Holiday Songs of the Century by the American Society of Composers, Authors and Publishers.