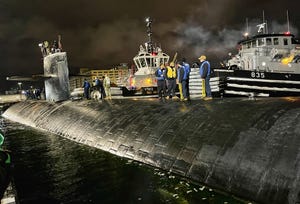 BREMERTON — By the end of this year, about 100 sailors who continued to serve aboard the USS Oklahoma City submarine, currently moored in a drydock at the Puget Sound Naval Shipyard, will bid farewell to the ship.

“We won’t need to watch the watch anymore,” said Cmdr. Sean Welch, the last captain of the nearly 34-year-old boat.

Like the voyage of more than 130 other nuclear-powered submarines that have come before it, the USS Oklahoma City‘s end of life comes here at the nation’s largest public shipyard, where it will eventually be cut up and sold to scrap.

On Friday, from a deck atop the shipyard administration building overlooking the submarine, current and former sailors, their families and dignitaries from Oklahoma City gathered to mark the inactivation of the submarine, a dispatch as the boat prepares to enter a water graveyard at Naval Base Kitsap-Bremerton.

The 36th of 62 Los Angeles-class fast-attack submarines built, the ship commissioned in 1988 made headlines several times during her career. He was among the first to make the trip from the Arctic to the Pacific Ocean under the ice in 2005; his patrol also led to the seizure of 11 metric tons of cocaine worth $1.5 billion.

For the past decade, the boat, which was part of a class of Cold War-era vessels built to hunt submarines and surface ships, was part of the U-boat Squadron 15 based in Guam.

Many sailors exchanged stories of life aboard the 360-foot-long submarine. Retired Admiral James Foggo, who commanded the boat in 1998, recalled being at sea when he once received an urgent coded message. He read the heartbreaking news of his father’s death. Despite the blow of the loss, he still had to lead his crew.

Still, the boat would provide the proper platform to honor her father, a Canadian who fought in World War II. He dumped his father’s ashes from the USS Oklahoma City while en route in the Atlantic Ocean.

The boat had a special relationship with its eponymous city, located more than 500 miles from the nearest ocean. The crew members donated blood following the Oklahoma City bombing who killed 168 people in a federal building in April 1995. Other sailors continued to participate in a memorial marathon in the years following the terrorist attack.

“They’ve embraced our crew and our ship in so many ways,” said retired Captain Kevin Reardon, the ship’s first deployed commanding officer. “We cherished this relationship.”

Since the start of the COVID-19 pandemic, this was the first ceremony for an inactivated submarine at Puget Sound Naval Shipyard. Other submarines like the USS Bremerton – which was inactivated a year ago – have seen reduced attendance due to the virus.

Seven former commanders attended the ceremony. Welch, the latter, praised the Kitsap community for helping the crew adjust to life in the Pacific Northwest.

“We were embraced from day one,” he said. “It was a smooth transition here.”

As part of its inactivation, the submarine will follow the traditions of others at the end of its life. In previous work, the shipyard cut its mud pans and sonar domes, fore and aft of the boat. After inactivation and decommissioning this fall, it will sit in a submarine graveyard for several years, until it is brought back to drydock and fully dismantled. This process will also package its nuclear reactor, which will be transported by barge to the Hanford site in eastern Washington. It will remain there for the next millennium or so.

Slicing the submarine can also give its namesake city a chance to retain certain relics, including the sail. Fundraising continues for a memorial to the boat along the Oklahoma River.

“We’re going to try to bring back as much of this submarine as the Navy will allow, so people can see it and understand the story behind it,” said Oklahoma City Councilman Bradley Carter. says Oklahoman.

Josh Farley is a reporter covering the military and Bremerton for the Kitsap Sun. He can be reached at 360-792-9227, [email protected] or on Twitter at @joshfarley.