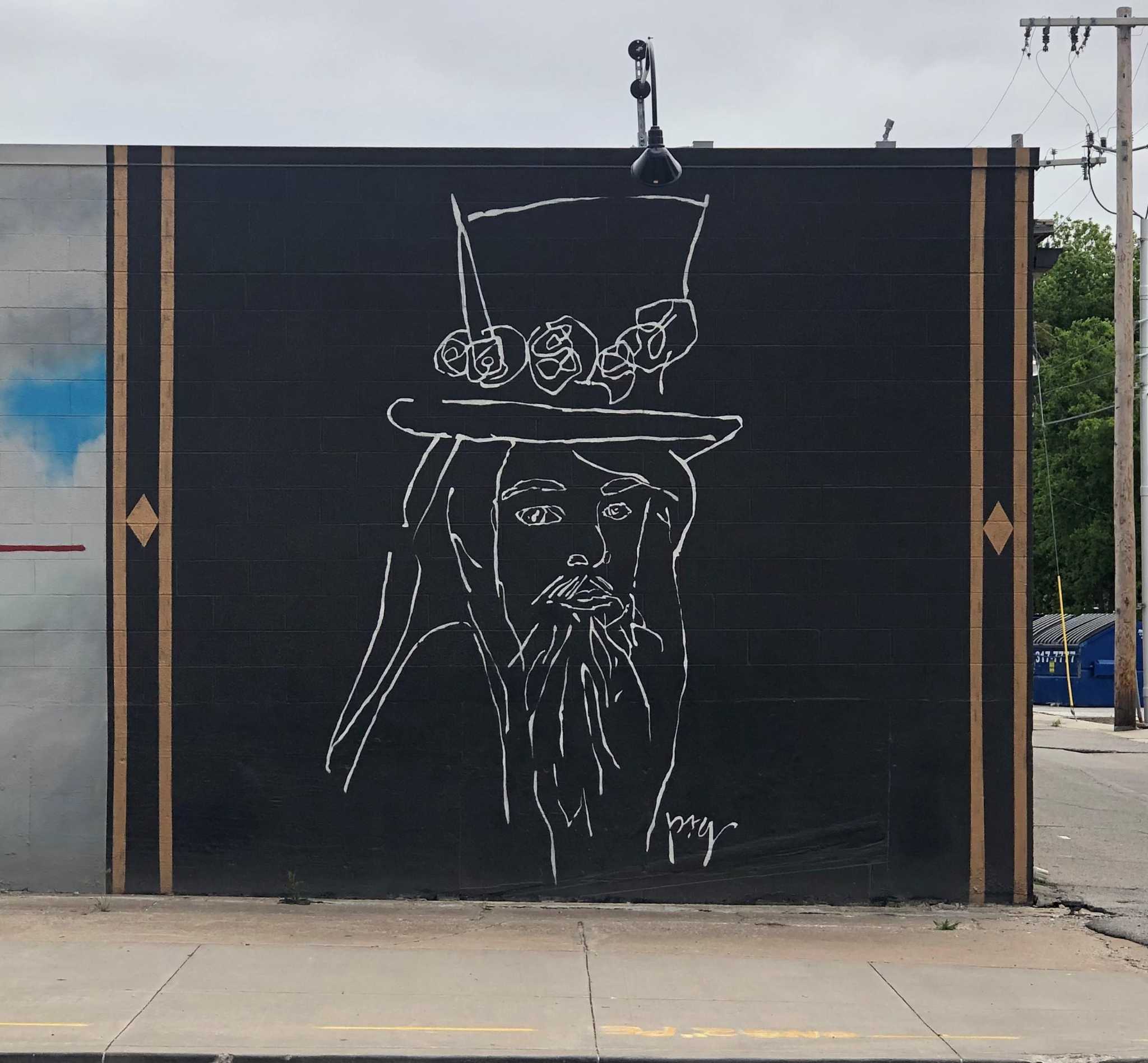 Teresa Knox’s path to owning a recording studio with a rich history began with a Slurpee. As difficult as it may seem, some 45 years ago, 7-Eleven created a series of collectible plastic cups featuring notable musicians of the time. Among them: the Allman Brothers Band, Peter Frampton, Johnny Nash and Leon Russell.

Knox kept her Russell cut because he was a fellow Tulsan and she liked his music.

Decades later, Russell is the public face and owner of Church Studio, a sacred place for music fans. There Russell recorded his own music as well as other artists including Tom Petty’s Mudcrutch, Stevie Wonder, Eric Clapton, Willie Nelson, Peter Tosh and dozens of others.

The structure – built as a church in 1915 and transformed by Russell into a studio in 1972 – lay in ruins for years. “It was just floating,” Knox says.

She bought it six years ago and embarked on a majestic restoration, starting with its designation as a National Historic Landmark. Unlike the rectangular camelback shape of all the other iconic signs, the one outside Church Studio is an oval, mirroring the shape of Russell’s Shelter Records logo. Knox hoped the studio’s reputation would attract musicians to record, and it has since it opened in March. And though she’s poured her personal Russell archive into space — thousands of items, including Russell’s hats, canes, part of a famous rhinestone-studded costume — creating a museum/workshop hybrid , Knox did not anticipate much tourist traffic.

“We had 4,000 visits from people in March alone,” she says. “I knew people liked Leon, but I didn’t expect it.

A fan’s lawsuit that started with a Slurpee cup has boiled over. And the history of Church Studio mirrors that of Tulsa, which has undergone a series of revitalization projects in recent years that have brought out the city’s history – the celebration and the artistry, as well as the complexity and tragedy.

The Church Studio enjoyed a heavy flow of visitors this month, thanks to the opening of the Bob Dylan Center about a mile away. These days, Tulsa, a city with a distinct and storied musical history, is quickly becoming a destination for music tourism comparable to other legendary music cities like Memphis and New Orleans.

The Dylan Center and Woody Guthrie Center reside in the same building on the same block, both funded by the George Kaiser Family Foundation, which used some of the oil and gas billionaire’s loot to create two spaces that function as both museums and research centers. .

Unlike these newer spaces, Cain’s Ballroom is only a few blocks away. It dates back to 1924 and has hosted dozens of country music legends, some of whose oversized portraits line the perimeter of the room: Hank Williams, Ernest Tubb and Roy Rogers. For seven years, beginning in 1935, Cain’s was the base of operations for Western swing legend Bob Wills.

When Elvis Costello took the stage to mark the opening of the Dylan Center, he remarked that his first visit to Cain’s was in 1978. The venue is worth a visit whether or not one stays for the live music at this that evening.

For those inclined towards cemetery tourism, Wills is buried about eight miles away in Memorial Park, a cemetery that is also the final resting place of Russell, Roy Clark and Carl Radle, one of Eric Clapton’s Dominos. Russell’s giant marble piano marker makes his plot easy to find, and Clark’s is great too. Wills and Radle are marked by headstones nestled in the grass, so even with a section number they require a bit of hunting.

Tulsa also delved into its cinematic history. The Outsiders House Museum is in the space where Francis Ford Coppola made his 1982 film based on SE Hinton’s Ageless Book. Take the right path from the Greenwood neighborhood, where the Dylan and Guthrie Centers are, and pass the street where Matt Dillon and Mickey Rourke took a remarkable motorcycle ride in Coppola’s “Rumble Fish,” another Hinton story transformed in movie.

Greenwood is bursting with the fruits expected of a revamped part of town. It is home to the Tulsa Drillers, a minor league baseball team; a pretty independent bookstore; and well-equipped food and beverage establishments. The first weekend in May, it hosted Mayfest, which lined the street with art vendors while live music erupted from Guthrie Green, another tip for the Oklahoman songwriter.

Of course, any urban twist has a lot of history under the veneer. Not all of Tulsa’s history is sentimental.

Take a walk along Greenwood Avenue in this neighborhood and you’ll find Tulsans rejecting the idea of ​​whitewashing history texts. All sorts of businesses line the street, and before reaching the door of one, a visitor passes a bronze bollard fixed to the concrete on the sidewalk. The markers represent businesses that existed before the district and its Black Wall Street were ransacked and burned down 101 years ago.

Some of the markers represent businesses that have been burned down and reopened (Dillard’s Shoe Shine Parlor). The majority represents businesses like the one owned by Dr. GG Patrick, which have been destroyed and closed forever. If the story told at the Greenwood Rising Museum finds no place in the textbooks in an age of historical manipulation, Tulsans along this avenue have seen fit to keep the story embedded in metal and stone, which are less prone to political escape.

Greenwood Rising is as enlightening as it is devastating. Thanks to television’s “Watchmen,” the Tulsa Massacre is better known today than it has been (outside of Tulsa) for a century. That said, the museum showcases a vibrant and thriving black community that was sacked for reasons as predictable as they were outrageous.

The museum does not attempt to compile statistics on the number of people killed or the number of businesses destroyed. It offers some estimates, but instead presents a startling situation of then and now as it tries to replicate a Greenwood community a century ago and how it was reduced to ashes.

“They have the jacket”

Walking through the Greenwood arcades in Tulsa’s main downtown opens up a later space full of intriguing places worthy of a visit. A mile from the Church Studio there is a magnificent mural by Russell. Decopolis is a fascinating destination at the Philcade Building, which is a feast of art deco design, with shadow boxes across its lobby that testify to its history. The design elements of the building are breathtaking, commanding photo after photo of small elements both outside and inside, with an elevator that can take its occupants back in time. (Note: The Topeca coffee roasters inside the building are also able to manipulate the weather with their exceptional brew.)

My Lyft driver had the kind of business degree day job you’d find in the city. Originally from Nigeria, he acknowledged that Houston had a large community of Nigerian immigrants and their children. But he found Tulsa’s pace more enjoyable. Highway lanes are not battlefields, but rather lodging points.

This city of about 400,000 people surely has the same problems as the rest of the nation: a divided city within a divided nation. But it also seems to embrace its history – good and bad – rather than picking out pieces that make it shine. With such a mindset, a Bob Dylan Center feels like a natural resident in a city that seems dedicated to its arts, culture, and history.

The Church Studio is therefore an excellent representation of Tulsa. Once Knox had the space designated as a historic landmark, rules and regulations applied. She has not been able to create her lobby and archives in a way aligned with the 107-year-old church.

So the past is the past, and the new must be grafted onto the old. The entrance to the studio is fairly modern, but with art and design details that hint at the past: wires along a stairwell resemble the strings of a guitar or piano.

But the marriage of history and commerce remains the backbone of such a place. Speaking of the Dylan Center, Elvis Costello said of the mix of form and function, “You have to have both. It is a commercial enterprise.

The studio welcomed guitar genius Tommy Emmanuel as its first musical guest and has had many visitors since, including Kenny Loggins. But two Rock & Roll Hall of Fame curators could be seen eyeing Russell’s pink-stitched, rhinestone-speckled pants and accompanying felt hat.

“They,” Knox said, nodding at the conservatives, “the Rock Hall…have the jacket.”