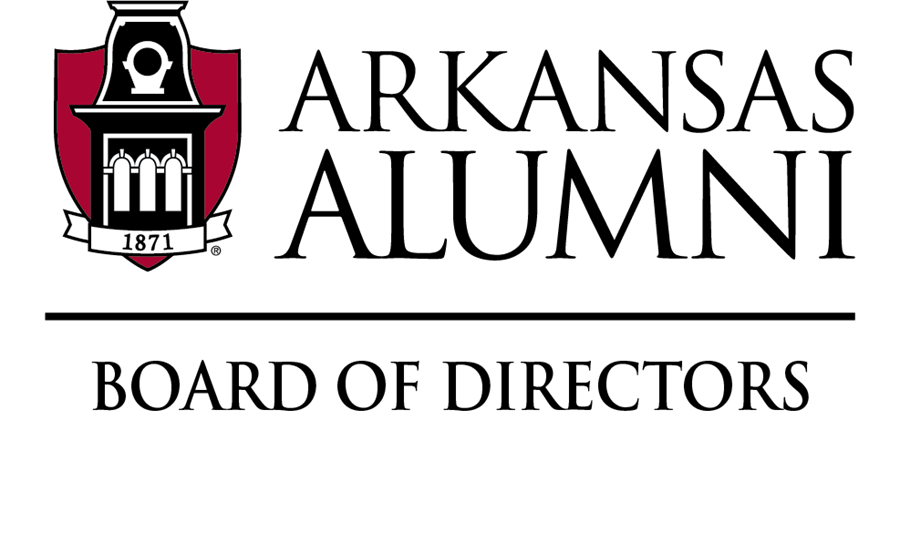 The Arkansas Alumni Association has appointed its new members to the Class of 2024 of the National Alumni Board of Directors. Each of these new board members began serving a three-year term on Thursday, July 1.

Amy May Hopper BSA’15 holder of a diploma in agricultural trade. After graduation, Hopper moved to Kansas City to work for The Andersons, a food company, first as a commodity trader in training. Also with The Andersons, Hopper is now a Profit Center Manager for a trading office that focuses on the cottonseed trade.

Hopper and her husband live in Belton, Missouri, but are frequently reunited in Arkansas where they both have family. In their free time, they enjoy spending time outdoors hiking, hunting, biking, and running. Hopper also enjoys training and participating in field competitions and obedience events with their family’s bird dog.

Hopper is a former Razorback Classic of the Arkansas Alumni Association and is a life member of the Association.

Faheem Khan BSBA’91 of Lewisville, Texas, is currently Executive Director of JPMorgan Chase, leading its hosting and hospitality vertical within Merchant Services. Khan is a proven leader with 29 years of proven success in sales, business development and leadership. He currently serves on the board of directors of the Asian American Hotel Owners Association (AAHOA), the largest association of hotel owners in the world.

Great traveler in the United States and abroad, Khan and his wife, Cissy MBA ’91, have been married for over 28 years and have two children, Noah and Nadia. Nadia, a second generation Razorback, is a junior at U of A with a major in marketing. Khan is a life member of the Arkansas Alumni Association.

Looney returned to his hometown of Jonesboro in 2013 and practiced law with Waddell, Cole & Jones, PLLC. In 2018, Looney joined the Arkansas Children’s Foundation where he now helps supporters advance the health system’s mission by leveraging tax and giving planning strategies.

Oliver Sims BSBA’85 of Carrollton, Texas, is the US leader in global technical sales for CA Technologies, a division of Broadcom. He is the co-founder of Henry Health, a company focused on improving access to and consumption of culturally appropriate mental health services and self-care support for black men and their families. Sims is also a Managing Partner of Oliver Sims Business Advisors, a business advisory and investment firm that focuses on assisting and investing in tech startups.

In 2018, Sims received the Morris Fair Heart Award from the Arkansas Alumni Association, for exemplifying the spirit of volunteerism, enthusiasm and commitment to the participation of the alumni group. He is an active and current member of the board of directors of the Black Alumni Society and a life member of the association.

Kristine Stover BSBA’81 of Tulsa, Oklahoma, is president of Stover Company. She received her management degree from Sam M. Walton College of Business. Stover currently sits on the Dean’s Advisory Board for U of A Libraries and was recently a member of the fundraising committee for the new Delta Gamma House on the U of A campus. Stover is passionate about l He helps his community and is a board member of Metro Tulsa YMCA, Tulsa City Hall, and is active in Leadership Oklahoma.

His sons, Logan BA’13, BS’15 and Kohl BS ’15, followed in their mother’s footsteps and attended the U of A. Stover is a Life, A + Member of the Arkansas Alumni Association.

Cedric Williams BSBA’93 from Forrest City is originally from Stephens, Arkansas. He is the mayor of Forrest City in the third year of his first term and also a State Farm insurance agent with over 26 years of experience in central Arkansas.

Williams takes community engagement to heart as he sits on various boards of directors, including the Winthrop Rockefeller Foundation, ARISA Health and the East Arkansas Planning District. In his spare time, he enjoys spending quality time with his wife, Brandye, and two daughters, Tyra and Sydni Williams.

He is an active and former member of the board of directors of the Black Alumni Society. Williams is a life member of the Arkansas Alumni Association.

RETURN OF BOARD MEMBERS

Four members of the board of directors have been selected for a second three-year term as part of the 2024 class. They are Chris Johnson BSBA ’93 from Little Rock; Bobby Jones BS ’84 from Savannah, Georgia; Connie Lewis Lensing BA ’74, JD ’77 from Memphis, Tennessee; and Courtney Norton BA ’07 of Fayetteville.

Don Walker BSA ’74 de Fayetteville will move from treasurer to president-elect. He will be president-elect for one year. Walker recently retired from Arvest Bank after a 42 year career as EVP, Regional Executive.

He received a BS in Agriculture from Dale Bumpers College of Agricultural, Food, and Life Sciences. Walker was hired by Sam Walton in 1978 and served as president of three of Arvest’s markets – Siloam Springs, Bentonville and Tulsa, Oklahoma. Walker has focused on the economic development and support of numerous nonprofits in these markets, as well as growing the bank’s market share.

Walker was the Federal Government Relations Representative for Arvest and continues to play that role in retirement. He has served on the National Alumni Board of Directors since July 2017.

She received her BA in English from the J. William Fulbright College of Arts and Sciences with a minor in Communication and followed by a Juris Doctor from the U of A School of Law. As a student at the U of A, Wright was a Fulbright scholar and editor of theArkansas Law Review.

A successful lawyer, she broke the glass ceiling in a very traditional automotive aftermarket industry and assumed the highest legal role at AutoZone in 2014.

Active in her community, Wright is a past chair of the board of directors of the Memphis in May International Festival, which extends cultural education programs to schools in Shelby County. She has served on the National Alumni Board of Directors since July 2019.

A full list of board members is available at www.arkansasalumni.org/board.

Mayor of Lawton delivers state of the city speech